​Nicholas Young's career began in one of London's 'Magic Circle' law firms as a corporate lawyer.  After moving to Suffolk he discovered his vocation as a charity worker and has worked for Sue Ryder and Leonard Cheshire, as a Chief Executive of Macmillan Cancer Support and as the Chief Executive of the British Red Cross before stepping down in 2014.

He was knighted in 2000 for services to cancer care and received the Queen's Badge of Honour in 2013.  In his 'retirement' he continues to work as a charity trustee, adviser and consultant.

Sir Nicholas gave a very heartwarming talk (with Halina acting as interviewer) to an appreciative audience in the Swifts on Wednesday evening.

Sir Nicholas told us how he was inspired to write the book when he found his father’s diary after his death in 1986.   Leslie Young had never spoken of his war experience, and the book has involved many years of painstaking research.

Since his retirement from the Red Cross Sir Nicholas and his wife have visited all the places where his father (known as Porky) was given shelter on his escape from the Nazis across Italy.  These were very poor families in the Italian Apennines  who knew that if they were caught helping the Allies they and their families would be shot.  He met one lady who was 15 when ‘Porky’ knocked at their door and clearly recounted the whole episode.   They have kept in touch with many of the families.

​After questions from the floor Sir Nicholas signed copies of his book and enjoyed a well earned glass of wine.    The proceeds from his book sales all go to support the Monte San Martino Trust (set up by former POWs in Italy). 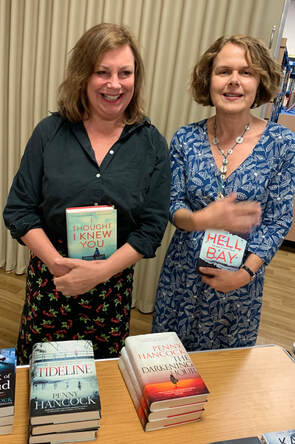 ​Both authors lived in South London and both married artists who they agree have been useful when discussing their  ideas.  Kate set her first book in South London and now lives in Cambridge. Penny lives in Waterbeach where she now appreciates the wide open skies. When they became friends they discovered they had both worked as usherettes at the Greenwich Cinema, though at different times.


It was a great evening and Kate and Penny were happy to answer questions from the floor and in fact learnt a few tips from one of our writing group members. They also brought some of their books to sell which quickly disappeared.