When the Library invited Susan Grossey to give an author talk, we did not know much about her, or her books.  What a treat she gave us.  Susan talked for an hour to an audience of thirty five about her detective Constable Samuel Plank, the main character in her series of novels.


Susan also told us about money laundering.  She has her own company advising on how to spot and avoid this and other financial crime, and has written several non-fiction books on this subject.


She decided to write her first novel Fatal Forgery when she read about the Fauntleroy case and wondered why such a respected and clever man had pleaded guilty to fraud so quickly.  She researched the case and wrote her first book, but this was rejected.  She took on board the criticism and decided to rewrite the book and to self-publish.


Susan pays great attention to detail and weaves interesting historical facts seamlessly amongst the fiction.  Where Samuel walks to various places in the books she has “walked the Plank” too, making sure what she has said is viable.


Susan told us about her experience with self-publishing, including cover design and layout.  Self-published books are ‘virtual’ and only printed by Amazon when ordered: they are ready and delivered in 24 hours.


Susan aims to write one book a year, to be published in October.  She writes 2000 words each Sunday from January to June.  She doesn’t know what she will do when the series ends - seven books - as she is very fond of Constable Plank and his wife Martha.    So far she has written 3 of them and has the others planned.  Because the planning is all done, Susan can write which chapter she fancies when she sits down on a Sunday i.e. she can write Chapter 5 before she has written Chapter 2!


We were very lucky to have such an interesting, enthusiastic and entertaining speaker.

Summer Reading Challenge 2016
The theme for 2016 was'The Big Friendly Read', celebrating 100 years since the birth of Roald Dahl.
168 children signed up and 125 completed the Challenge of reading 6 books during the summer holidays and coming into the Library to talk about their books to one of our volunteers.
Medal ceremonies were held in Fulbourn, Great Wilbraham and Teversham Primary Schools and in the Library.
​ 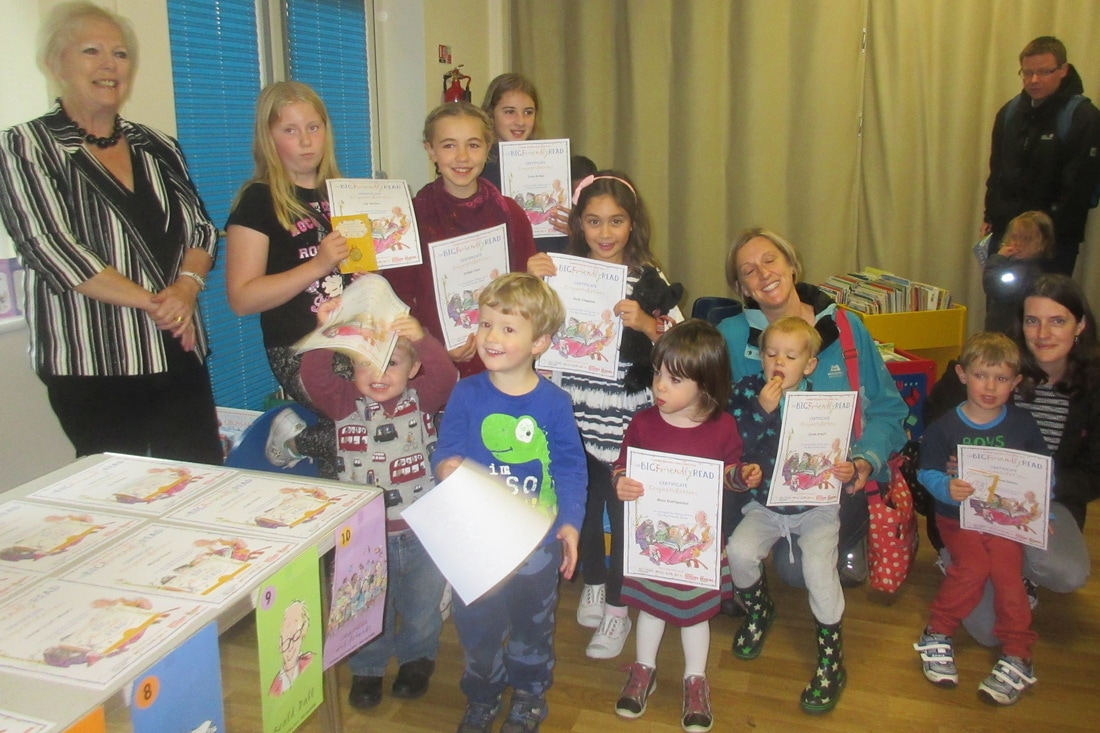 Some of the children at the Library Medal Ceremony