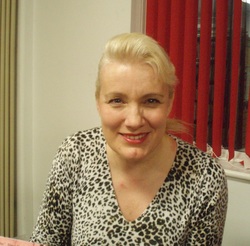 Alison gave us a brilliant and amusing talk attended by over fifty people.
She told us how she wrote her first novel, The Calling, but was advised by an Agent that if she wanted to use the character of Gary Goodhew again she would need to write a book introducing him in more detail, hence she wrote Cambridge Blue, although she was never completely happy with the ending. But this started the series, and she still has two more to write making seven Gary Goodhew novels in all. She told us how many rewrites she had to do before she got to the end of Cambridge Blue and that now she plans her novels meticulously and then writes through from chapter one to the end. She knows the beginning and end of each chapter so once she is happy with each one she does not read it through again before sending it off to her publisher. She researches her books meticulously and makes sure all the Cambridge venues are accurate.
The evening ended with a book signing and a glass of wine. 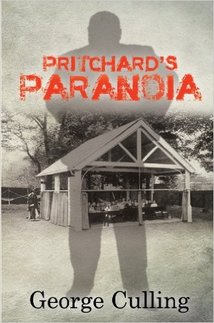 The Writing Group were delighted to have George Culling give an amusing and informative talk about his new book: Pritchard's Paranoia - A school in crisis. He told us some of the history of Open-Air Schools which were started in Germany in 1904 for delicate children, and spread to England before the First World War. In the sixties, they were denigrated by the popular press, horrified that children should be exposed to all weathers. Subsequently windows were put in to the previously open buildings and heating provided so they became 'normal' schools. George told us that the mostly undernourished children from poor backgrounds flourished with the three good meals a day and one to one education. He gave us an outline of his book which is based on his own teaching experience in such a school.​

This was combined with Storytime and judging from the noise generated everyone enjoyed themselves.  Halina made a cake in honour of the occasion.